In stock
Skip to the end of the images gallery 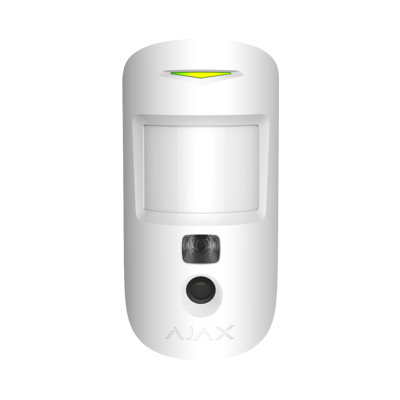 MotionCam (PhOD) Jeweller equipped with a built-in camera to show the real situation at the facility. There
are three types of photo verification: by alarm, by scenario, and on demand. The user can request and see
photos with one click in the Ajax app.

The detector lens increases sensitivity to human motion, cutting off false alarms to other sources of IR radiation. It is designed so that potential IR radiation from pets and other interferences affect only the small lens sections. Large sections, on the contrary, are aimed at the most likely places of burglar motion.

For additional protection against false alarms, the detector uses the SmartDetect algorithm. The armed detector constantly analyses the thermal diagram from the PIR sensor: the intensity of IR radiation, the size of the thermal spots, the speed of movement and other parameters.

When properly installed and configured, the detector does not react to common sources of false alarms and pets under 50 cm tall and 20 kg weight. For seamless installation, it has pre-installed batteries and the SmartBracket mounting panel. So, installers don’t need to disassemble the detector and won’t damage the electronics during installation.

MotionCam (PhOD) Jeweller equipped with a built-in camera to show the real situation at the facility. There
are three types of photo verification: by alarm, by scenario, and on demand. The user can request and see
photos with one click in the Ajax app.

Photo by Alarm
A built-in camera is activated if the detector is armed and motion is detected. Only users with access to the
hub event feed and security company employees can view the photos.

Photo on Demand
The user takes pictures at any time or when a detector is armed (depending on settings). Photos on demand
are not sent to the security company monitoring station.

Jeweller and Wings are two way wireless data transfer protocols that provide fast and reliable communication between hubs and devices. Radio protocols work independently of each other and focus on their own function. The Jeweller protocol delivers instant data rich alarms: security companies and users know which device was triggered, when and where it happened. The Wings protocol delivers photos taken by a detector built in camera.

Both protocols feature encryption and authentication to prevent forgery, and polling to display device status in real time. Supporting up to 1,700 m of wireless connectivity, Jeweller and Wings are ready to protect facilities and deliver the best user experience for both end users and installers.